End of the Planet of Capitalism? Any provocation would swiftly escalate into an all-out nuclear conflict.

N Korea would never trade its atomic deterrent for aid.

... The nuclear armed forces "should be expanded and beefed up qualitatively and quantitatively until the denuclearisation of the world is realised"

hard to bomb and colonize nuclear state
Posted by news at 6:22 PM No comments:

Chemtrails: Aerosol and Electromagnetic Weapons in the Age of Nuclear War 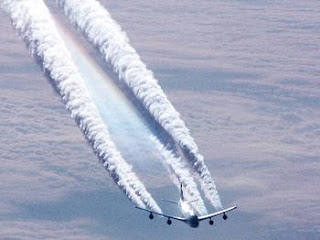 Chemtrails: Aerosol and Electromagnetic Weapons in the Age of Nuclear War | Pakalert Press
Posted by news at 5:00 PM No comments:

CGI mock up of a mosquito drone equipped with the 'ability' to take DNA samples or possible inject objects beneath the skin.


The Future Of Micro Drones Is Getting Pretty Scary According To Alan Lovejoy - Business Insider
Posted by news at 4:06 PM No comments:


Inside the Ring: New Bear bomber flights - Washington Times
Posted by news at 5:55 PM No comments:

The AcquaBounty Technologies company combined genes from two species of salmon with a pouter eel to produce a fish it says it can bring to market twice as fast as conventional salmon.

The GM salmon is the first in some 30 other species of transgendered fish under development, including tilapia.

Researchers are also working to bring GM cows, chickens and pigs to market.

92% of US soy is genetically modified


Major supermarket chains promise not to sell genetically engineered salmon in the U.S. | The Raw Story
Posted by news at 3:09 PM No comments:

Foods highest in vitamin E such as sunflower seeds, pecans, almonds, spinach, and collard greens are known to protect the skin from ultraviolet light, prevent cell damage from free radicals, allow cells to communicate effectively and protect against cancer and Alzheimer's disease.

Foods highest in vitamin E such as sunflower seeds, pecans, almonds, spinach, and collard greens
are known
to protect the skin from ultraviolet light,
prevent cell damage from free radicals,
allow cells to communicate effectively and protect against cancer and Alzheimer's disease.

America’s super rich have no plan for the middle class, or a nation for that case.

we might as well be speaking Urdu to them these days. Increasingly we’re just a kind of hive-like background noise they hear in the time it takes to walk from the cab to the club.I listened as someone asked this man this week if he was at all worried about the growing sense most Americans have that the nation’s super-rich have decoupled themselves from the fate of the nation?He was worried

----
billionaires class is a cancer of society, of a democracy
siphoning off profits generated by everybody else

How Food Companies Exploit Americans with Ingredients Banned in Other Countries. 41% Americans projected to get cancer.

Could these banned ingredients be contributing to the higher mortality and disease rates here in the U.S.?

“Americans are sicker and die younger than other people in wealthy nations.” The United States spends 2.5 times more on health care than any other nation, however, when compared with 16 other nations we come in dead last in terms of health and life expectancy for men and near the bottom for women.

The victims of obesity are likely the same victims of systematic brainwashing from Big Food marketers, relying on diet soda or low fat products or looking only at calories on product labels.


US government has their hands tied by big food industry and chemical company lobbyists that basically control what the FDA approves, deems safe for human consumption, and our overall food policy.

We must challenge the U.S. food industry to discontinue the use of banned ingredients that are not allowed elsewhere in the world. We deserve to have the same quality food without potential toxins.

It is appalling to witness the examples I am about to share with you. The U.S. food corporations are unnecessarily feeding us chemicals – while leaving out almost all questionable ingredients in our friends’ products overseas.
The point is the food industry has already formulated safer, better products, but they are voluntarily only selling inferior versions of these products here in America.The evidence of this runs the gamut from fast food places to boxed cake mix to cereal to candy and even oatmeal – you can’t escape it.

Our US government is corrupt more than any other in history. They kill people in other countries with guns, and they kill us with food.

Self-sufficiency is discouraged and non-GMO and organic farmers’ produce is denied sale at major food chains and sometimes in some states cannot be sold direct from their farms or roadside.


I am not surprised that other countries are literally AHEAD of us when it comes to not only food and health, but with health care and the basic welfare of their people.
Here, politics demonize such intelligence as ‘Socialism’.
Food Babe Investigates: How Food Companies Exploit Americans with Ingredients Banned in Other Countries | Pakalert Press
Posted by news at 9:56 AM No comments:

GE said in the filing that it reinvested most of these profits in foreign business operations and does not intend to bring those profits back to the U.S.

Sixty big U.S. companies analyzed by the Wall Street Journal kept on average more than 40 percent of their annual profits overseas last year. The companies have attributed a growing amount of their revenue to foreign sales, and they have assigned patents and licenses to foreign subsidiaries.
Thanks to these practices, the U.S. is not only losing out on tax revenue, but it is also missing money kept overseas that will not be used to invest in the U.S. or pay dividends to shareholders.
It has become increasingly common for companies to move or keep their profits overseas.
The biggest U.S. companies boosted their offshore cash hoards by 14 percent last year, according to a separate Bloomberg report.
Apple, Microsoft and Google together have more than doubled their overseas holdings over the past two years.
The drugmakers Merck and Johnson & Johnson each saved about $2 billion last year by shifting profits overseas,

Exercises followed a recent surge in Russian strategic bomber flights that include a recent circling of the U.S. Pacific island of Guam by two Tu-95 Bear bomber and simulated bombing runs by Tu-95s against Alaska and California in June and July 12.

Three large nuclear storage facilities near Europe, including one that is located miles from the intersection of the Rusisan, Latvian, and Belarusian borders.
Two other nuclear storage complexes close to Europe are located at Zhukovka, near Belarus, and at Golovchino, near the Ukrainian city of Kharkiv.

Judge Imposimato stated publicly in writing that 9/11 was just like the “strategy of tension” carried out in Italy.

Specifically, the former Italian Prime Minister, Italian judges, and the former head of Italian counterintelligence admit that NATO, with the help of the Pentagon and CIA, carried out terror bombings in Italy and other European countries in the 1950s and blamed the communists, in order to rally people’s support for their governments in Europe in their fight against communism .

U.S. and New Zealand conducted secret tests of what is being described as a "tsunami bomb," which experts said was aimed at devastating coastal cities by using a series of underwater explosions that would result in massive tidal waves.

The tests, which were initially carried out around the waters of New Caledonia and Auckland during World War II, "showed that the weapon was feasible,

About 3,700 bombs were exploded during testing, first in New Caledonia

Why was JFK assassinated by cia?

He oppossed Cuba invasion and colonization.

He wanted to abolish Fed Reserve, a private bank controlling US money supply, US financial system.

You touch a money of ruling mafia, and thats bad.

Lyndon Johnson and Allen Dulles may very well have been co-CEOs of the JFK assassination; with the CIA in charge of the killing of JFK, and Lyndon Johnson and (his close friend and neighbor of 19 years in Washington, DC) FBI director J. Edgar Hoover in charge of the cover up.
Clint Murchison, Sr – more so than even H.L. Hunt – was a key player in the JFK assassination because of his close ties to the inner core of US intelligence (Allen Dulles, Nelson Rockefeller, John J. McCloy), close ties to Lyndon Johnson and J. Edgar Hoover of the FBI, bankers Rockefellers

Do Search This Blog